Character motto is derived from your character’s backstory. It’s how your character views the world and is a wonderful tool to use to create conflict among your characters (see chart below).

If the Heroine’s motto is “Don’t Rock the Boat” while the hero’s motto is “Might Makes Right” there’s going to be conflict.

But by pitting these two personalities together, the “Don’t Rock the Boat” character can learn that sometimes you must employ the “Might Makes Right” motto to find inner peace.

Motto is the key to developing your character’s growth arc and defines what the character must learn during the black moment to change this view.  Author Susan Gable gives several great examples in her blog titled, “What’s the Motto with Your Character?”

According to the Enneagram, there are nine personalities that exist. And each of those personalities has a different philosophy of the world and a unique motto, although mottos can be expressed in infinite ways.

Let’s take the Peacemaker (Personality Type 9) for example. According to her backstory, she’s learned that it’s not okay to assert herself. Her motto’s can be expressed as:

The Peacemaker avoids conflict at all costs by minimizing stressful situations, even if that conflict becomes damaging to herself and others. During her black moment, she’ll need to discover that the only way she’s going to find inner peace of mind is by confronting her fear of loss and separation. In other words, the only way out is through. Her motto might change to “Sometimes you have to grab the bull by the horns.”

This revised motto will give the Peacemaker strength to resolve the story after the black moment. My Big Fat Greek Wedding, specifically Fotoula Portokalos the main character, is an excellent example of the Peacemaker’s growth arc.

Use your character’s motto to control a scene. Remember that a person reacts to every situation by pulling from experience (backstory) and their world philosophy. 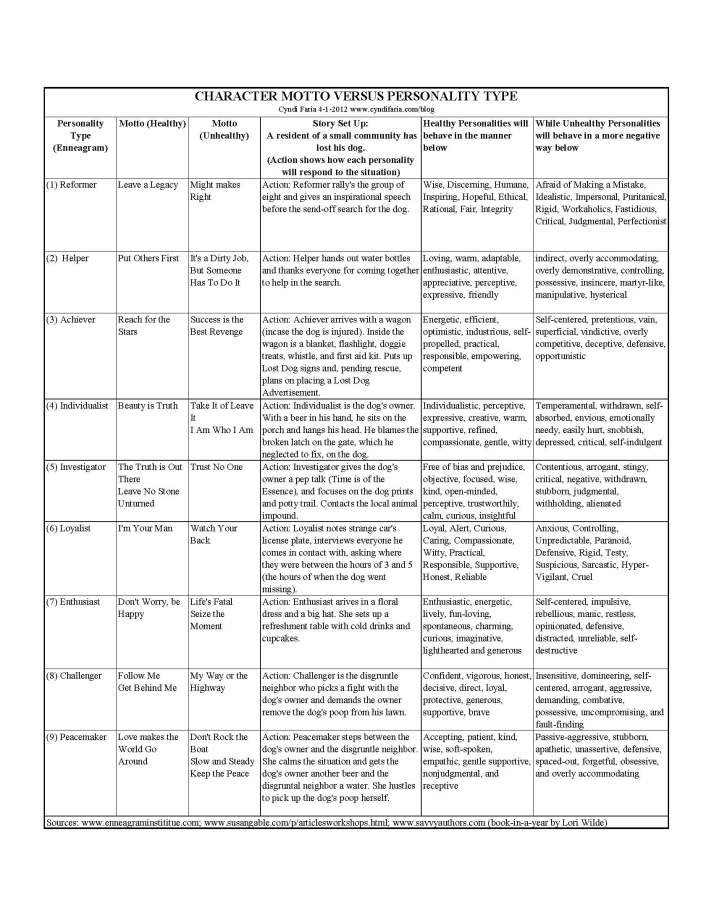 I hope this chart helps you understand the connection between your character’s motto and their personality type.  If you want read more on character’s motto, see my previous blog on Character Motto.

2 thoughts on “Motto vs Personality Type”